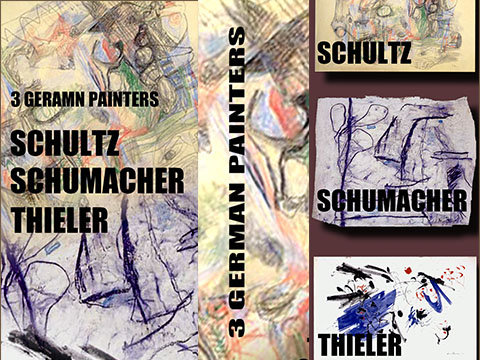 Emil Schumacher belongs to the group of founders of a new school of painting after the Second World War in Germany. He is considered the most important artist of the German Informal and has continued to go the way of a non-representative art, and continued to developing it up to today.

Emil Schumacher takes his painting out of the constraints of representation and reduces it to a few lines and colors. Whereas the heavy, dark and somber course of lines of his early period are reminiscent of expressionism, the color surfaces filled with light come close to the French culture of painting. However, as early as in the 1950s, the picture itself becomes the focus, in all its physical presence and materiality.

Fred Thieler is regarded as one of the main protagonists of German art after 1945 – and yet he rejects any claim to art for his work. “We are talking about painting, but we don’t mean art with painting” he says. It is this skepticism and the method developed from it that make Thieler’s work so interesting.

Transparent surfaces consisting of layers one over another come about, fixing of the moment. Thieler’s works demonstrate a high degree of sensitivity to the innate forces which emerge in the picture. This openness for the fleeting, the process itself, is what has made Fred Thieler’s position so significant for German art.

Typical of Schulze’s world of pictures is the dissolution of form in linear movements, parallel to the growing, withering and fading away of plants. In the course of this, mysterious labyrinthine structures emerge, entwined, woven like rank growths, which have been worked out in great detail. Looking back at forerunners such as Altdorfer, Bosch or Kubin, Bernhard Schulze himself once said, “What you can do, how much you can express with a line – to draw a line, lines, on the sheet of paper, to pull them along, to let them crawl – that is something which after all always has something to do with one’s own self.”