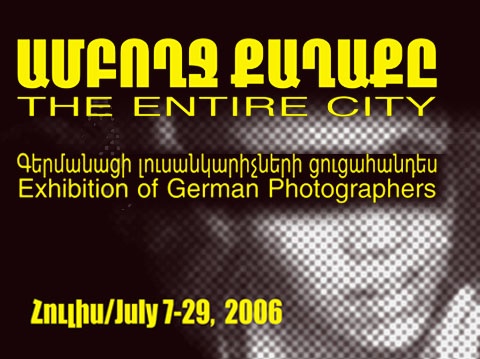 The Entire City is an exhibition of contemporary German photography. Six artists show their pictures of the city, of urban life, and of cultural situations. The themes are inside and outside, architecture and urban backdrops, centres and fringes, the public and the private, reproduction and interpretation.
The pictures show everyday situations and the tangible signs of change, urban spaces and the people who inhabit them. These images refer to topographies of the contemporary city and the stories that unfold there. This is not the staging of reality, but a reflection on the images we make of reality.
This exhibition brings together six very different forms of expression. They all have their own subjective artistic and photographic aims, ranging from a factual and constructive approach to a more systematic and conceptual one.

Eva Bertram is showing her photo project BARRIKADEN (Barricades). She picks up details from everyday situations of in¬accessibility, from the suburbs, gardens and interiors, situations of imprisonment in a physical and also aesthetic and intellectual sense.

Maria Sewcz works with series of pictures that refer to each other. Her photos with two pictures produce open visual dialogues. An urban location is associatively linked to a further one, without this resulting in a closed narrative.

Andreas Rost, in contrast, searches out those moments when reality tells its own story. For many years he has been taking photographs in East German towns and cities, and in Berlin, discovering teeming images of people and their relations with each other, images of the temptations, derisions, and the hidden or open emotions that the city offers to its inhabitants.

The inner world of the city is what interests the Japanese photographer Tomo Yamaguchi. Working in Berlin, she asked people she did not know to open up their apartments, and thus she wanders through the other, European culture, describing her impressions of private lives in images and texts.

Ulrich Wüst sees the centre of Berlin as a location of continuous change. The incursion of the new in structures that have grown over time, the erasure of traces of World War II that are still visible today, the re-organization of urban space-these are the themes he addresses in his unique artistic and pictorial language.

Zóltan Jóckay’s photo series is called erwachsen werden (Growing Up). It consists of unpretentious and very exactly drawn portraits, mainly of the younger generation that, like any preceding generation, is searching for its own place in the world under its own new conditions.