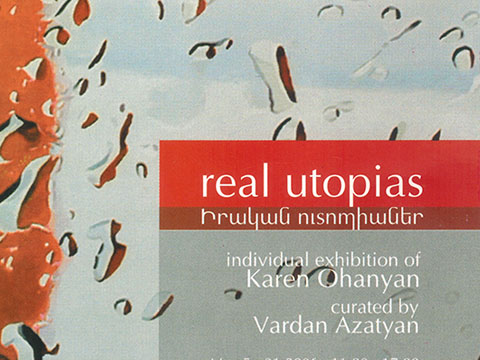 If one takes into account artistic and technical characteristics, scale and ambition of Karen Ohanyan’s series Real Utopias (2005-2006), one can rank them among the best paintings recently produced in Armenia. This article attempts at formal-structural and social analysis of this series.

Karen produced this series throughout a year. In different seasons he went to countryside and look pictures of human figures througt the dewy glass. What is interesting is that later these digital images were directly transferred onto the canvas from the screen of the computer.

Therefore, here we do not dealwilh pure paintings, but with painterly project which incorporates the elements of the discourse of painting (landscape painting in countryside, subtle impasto) and contemporary technological reality (digital and computer technologies).

Thus, the whole picture can be divided into three structural spaces; dew drops in the foreground, figure in the middle ground and the landscape in the background. And yet, one has to observe that there is one more, invisible plane: the transparent dewy glass which, at the same time, coincides with the physical surface of the canvas. Indeed, in the process of production Karen’s gaze of the reality is intermediated first by  the lens of photo camera, second by the dewy glass, third by the lens of projector, and fourth by the computer screen. This multilayered intermediation questions the simple, innocent and harmonious relation between artist and reality, making it complex and problematic. The work of art is not an outcome of artist’s spontaneous inspiration; it is produced in the complex relations of artist and his/her reality. Thus Karen’s pictures witness the difficulties, that he psychologically feels very strongly.

However, it seems that those difficulties are hidden in Karen’s works, just as the surface of the glass is  hidden from the viewer. Their colorful and optimistic atmosphere makes the viewer pass over the above mentioned difficulties. The works seem to breathe with creative spontaneity and freshness, though they were born out of the lack of that very spontaneity. Karen’s works are utopias, as they attempt to show what is impossible to find. Karen attempts at finding the harmony which does not exist in life, but not through recreating it In art, rather, finding it in reality where it is not the case. His images are fixed and identically reproduced in Armenia; paradoxically they are part of Armenian reality. This fact gives them the status of real utopias. Karen turns to countryside, tries to fix the absent harmony between human being and nature, fuses the natural force (water) with the figure making them one inseparable whole.