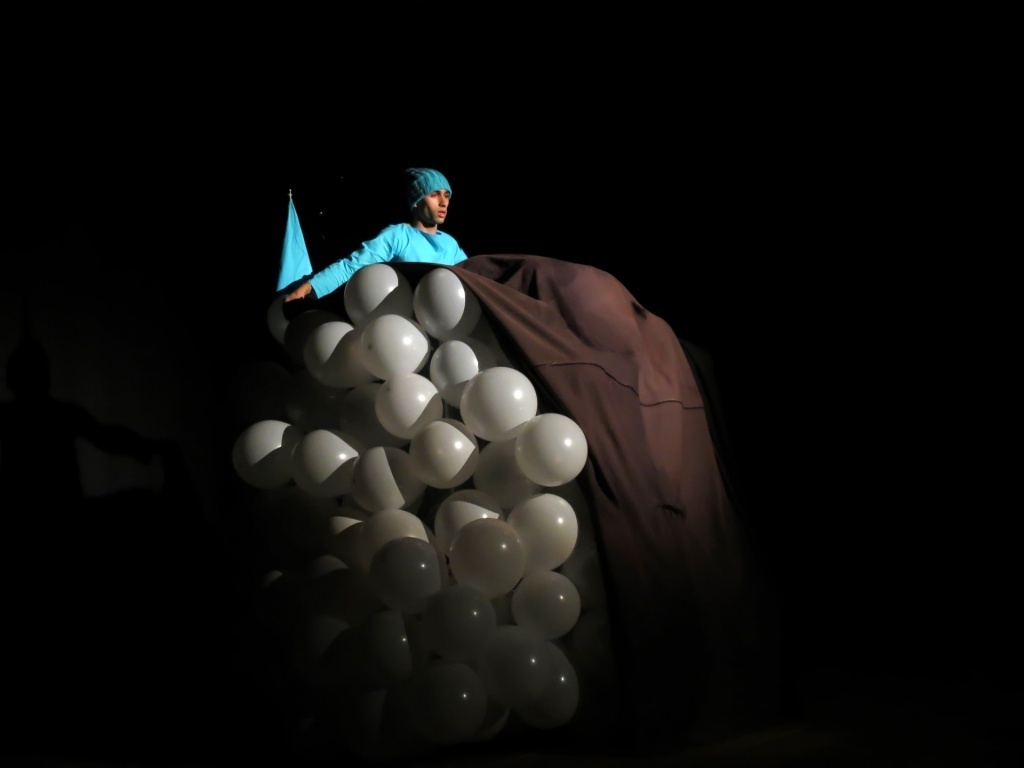 The ONLY…/ 20:00 Authors’ Award: MAIN AWARD OF THE FESTIVAL
Plastic Drama
Director: Anahit Ter-Sargsyan
Music: Vartan Harutyunyan
Performers: Hayk Zorikyan, Anahit Ter-Sargssyan
DESCRIPTION
When the only one, whose presence bestows you with faith and strength, is next to you, you become a miracle-making alchemic, who is capable of creating and donating his eyes, but…

The One Who CAN… / 15:00
BEST PERFORMER – Jury: Ashot Adamyan
Plastic Drama
Author and Performer: Aytzemnik Zakaryan
DESCRIPTION
Bells of man’s psyche go silent. The wheat-ear becomes symbol of the demise of the OLD and birth of the NEW. Man starts seeing, and knowing and accepting himself.

WWW. AMPHIBIA. COM / 30:00
Based on Hovhannes Tekgyozyan “Amphibian Man” play
Director, Set-Designer and Performer: Harutyun Galfayan
DESCRIPTION
People use all technical means not to look in each-other’s eyes. The hero of the play under psychological pressure, becomes isolated and unable to adapt to reality. He loses sensitivity of the reality and falls in virtual life: Formal and internal sub-layers, collusions of real and virtual lives, illusory, insane, pathological conditions, reality-imagination, duality of the self…

I AND ANOTHER ONE / 30:00
Author and Director: Onik Fhradyan
Performers: I- Onik Farhadyan, The Other- Ratat Rat
DESCRIPTION
Thinks and talks with himself, with someone… Goes insane and departs reality.

CELLAR / 15:00
Contemporary Dance
Director: Shoushanik Aslanyan
Performers: Tree, sling, clamp, chair: Lida Ghazaryn Tree, pencil. Door: Natalia Harutyunova
DESCRIPTION
Story of a tree, which sprouts, grows, but when it dies, they cut it and build domestic objects by it. Whereas in this case too the tree continues to breath. After all objects gets old and end up living in the cellar. At the end their quiet breathing is heard.

THE FOX WITH SEVERED TAIL
Based on Hovhannes Tumanyan tale.
Director: Silva Chobanyan
Performer: Gayane Yeghyazaryan
DESCRIPTION
Once upon a time there was an old woman… Where were you tail-less fox?

FILM, FILM, FILM / 20:00
Author and Director: Ratat Rat
Performers: House Lady: Tiruhi Hakobyan Deputy Director: Ratat Rat DESCRIPTION
A film is being shot in which a future actress who has “failed” getting in the Theatre Institute, wants to have a part.

AT THE HOLE OF RABBIT
Absurd based on Lewis Carroll’s “Alice In Wonderland” novel.
Director: Vartuhi Shahnazaryan
Performers: Alice 1 – Rubina Shahnazaryan, Alice 2 – Harytyun Muradyan, Alice-3 Bayandur Poghosyan, Cat – Ruben Alanakyan
DESCRIPTION
4 persons have appeared in a place of which they are basically uninformed. They are also uninformed of what happened or did not happen before. Some of the characters perhaps just exist in the mind of one of the characters.

O / 10:00
Pantomime, circus
Author and Performer: Armen Sargsyan
DESCRIPTION Separating from the whole, One ascends to the sky to continue life on the clouds. However a group of people finds him. A discussion ensues and during this discussion matures the idea that what is important is not the one, the two or even all, but it is the process which is important…