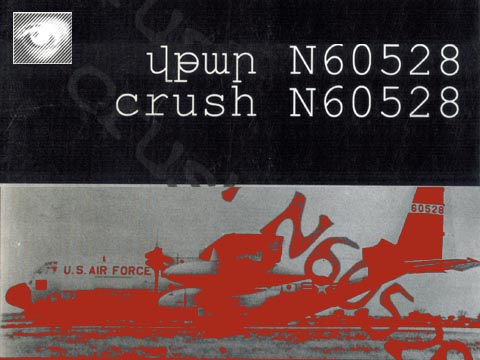 Author of the project

In Hovhannes Margarian’s video the witness of the 1958 incident of the shooting of American airplane near the village of Sasnashen is of the same age as the child in Steven Spielberg’s “Empire of the Rising Sun.” Just as for Spielberg’s hero, the airplane is a subject of attraction for our hero as well.

Events following September 11 suggest that wars have not disappeared, they have simply moved beyond the borders of Western civilization. What was the inner conflict of the West, namely the dispute between capitalism and socialism, today has turned into clashes between south and north, traditional and industrial civilizations, etc…

Displayed remnants of the airplane, like those of the Berlin Wall, remind us of the past bi-polar world where the borders of freedom and dictatorship coincided with the borders of states.Today the planet is unified but international terrorism comes to prove that the borders are more inner than outer. “After the September 11, we all are Muslims”, says Baudrillard.

By comparing this episode of the Cold War with September 11 and events following it, Hovhannes Margarian seems to suggest that the split of the united world and the re-birth of a new bi-polar one are not impossible.

Part of the exhibition consists of an installation of discovered remnants of the airplane and burned soil brought from the location of the incident. The installation is displayed at the “intersection of different cultures of local and global levels” at the large exhibition hall.

The terrorist act of September 11 in New York is brought in the exhibition as a metaphor of confrontation of cultures. Airplanes are often associated with freedom. The incident of 1958 in Armenia and the September 11 terrorist attack in New York are acts of preservation of cultural isolation, and attack against the West. In both cases the tool is the airplane, one of the symbols of western industrialization and automation directed against values of the same culture.

The project reflects upon cultural layers, prompting, that expressions of “confrontation of cultures” have emanated from the Cold War, and are consequences of the bi-polar world. The conceptual context of the project reiterated this interdependency, by allowing seeing their immediate relation.