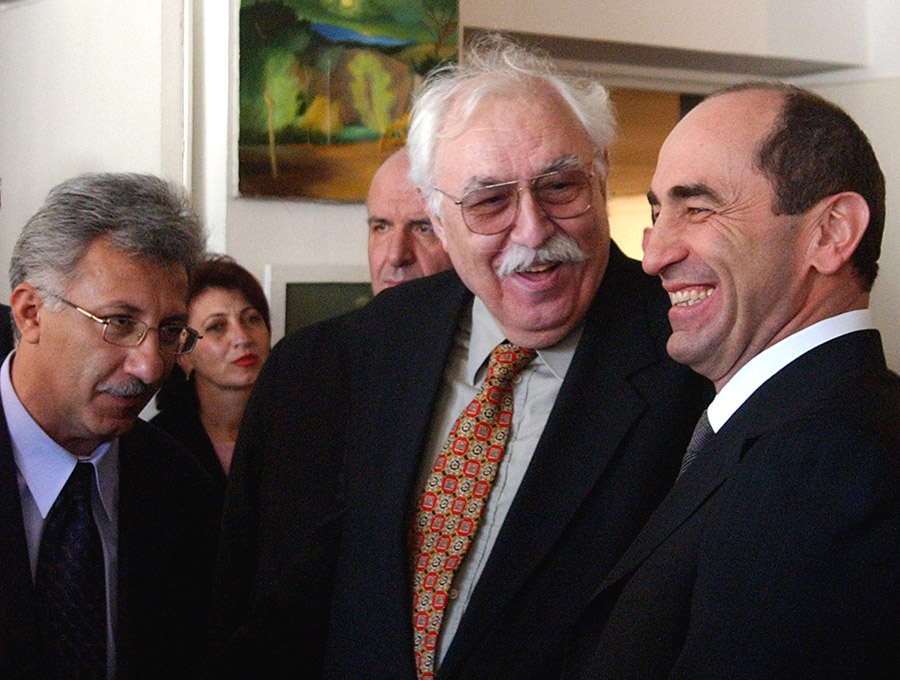 Yesterday the head of state Robert Kocharian visited NPAK, Center for Contemporary Experimental Art, one of the most energetic, dynamic and versatile cultural institutions in the country. The president was accompanied by newly the appointed minister of culture Hovik Hoveyan.

The visit surprisingly coincided with the opening of the VI International Festival of Alternative Art (May 7-12), which is almost the most important annual event of the Center. This time, one of the main trustees of the Center, Albert Boghossian, was present as well. “Robert Boghossian and Sons” Foundation plays a significant role in the sponsorship of various activities in the field of culture. For instance, the renovation of the building of the Center in 2002 was realized with the assistance of the Foundation in the amount of 100.000 USD. This year the Foundation has donated 30.000 USD for constructing an autonomous heating system, which will allow the Center to function throughout the whole year. It should be mentioned that the space given to the Center in the “experimental” and “avant-garde” in its name. Edward Balassanian considers that the main task of the Center is “the search for new talent, and their integration in the international arena”. In his opinion now there are more than a dozen of such male and female artists that are in par with their international peers.

President Robert Kocharian reviewed the exhibition of “Dream in Dialogue” (there can be various interpretations) with noticeable attention and interest. Today dialogue is the most important and timely issue. This is what is missing in the Armenian society on different levels, both in dream and in reality. Here paintings and images are caught from the authors’ dreams, have been altered, reconsidered, fixed and offered back to the eye of the beholder.

The exhibition seemed to me aesthetically complete, pure and truly conceptual. The long strip of photos of graffiti-drawings and signatures of the urban cosmos, added special charm to the exhibition. This was a photo-strip, which consisted of images that make people nervous, angry and sometimes even disgusted. Stretching in a long line, all these “cries”, slogans, the slang, as well as signs, traces and drawings on the walls, shop windows and trees become an artifact and trace a theme no less important for their time than those discovered in Pompeii and Herculaneum. These are traces of our social consciousness. The organizers called this project “Anonymous Dreams” seen in Yerevan, Giumri and Berlin.

Paintings, drawings and art objects are also present. The program of the festival will also include avant-garde music, theatrical performances and video presentations. Tsolak Topchian took pretty shots, fragments caught from the turmoil of the surrounding environment. Karen Ohanian paid attention to color mid 1990’s on the Main Avenue [Pavstos Biuzand Ave.] was originally a horrifying spectacle, practically only bare walls among ruins, trash and dust. The founders of the Center, Sonia and Edward Balassanian, put a lot of effort into restoring the building and adapting it to the needs of contemporary art. The recent renovation brought the structure up to European standards.

The Center is very dynamic, annually it organizes more than 10 events of different kind: exhibitions, concerts, festivals, etc. Art that finds refuge among its walls is not accepted by everybody with the same excitement and enthusiasm as the artists that created them and their supporters. These are a close circle of people and those who “celebrate” their work. Some people view NPAK’s activities not as a continuation of national traditions but as a reflection of globalized art. I think, everybody is entitled to his or her opinion, but I do not think that NPAK’s activities do not fit into the framework of our national culture, and anything should be taken away from it. And at last, it is not accidental that the Center has the words colorful plastic bags, Vahagn Hamalbashian drew on wrapping brown paper a creature from the worst nightmare, which reminded of  a beast.

Yesterday the results of the Young Artist Award initiated by Jean and Albert Boghossian in cooperation with NPAK were also announced. The competition involved young artists, video artists, musicians and writers from 16 to 30 years old. Garen Ohanian, Diana Hakobian, Tigran Khachatrian and Garen Gharslyan became the award recipients. Albert Boghossian handed them the prizes and promised that the competition will become a tradition and will expand in the future.

President Kocharian did not pass by the sculpture “Androgynous” [Melancholy] of Yervand Kotchar without paying attention. Last year a quadrupled copy of the original sculpture was cast in bronze and put in front of NPAK thanks to Edward Balassanian’s restless efforts. “Androgynous” is another proof of Kotchar’s greatness, another evidence that speaks for freeing his “Muse of Cybernetics” from the “Mergelian capture” and integrating it into the urban environment, desirably into the surroundings of the Cafesjian Museum. “Androgynous” again reminded that it is past time to relocate the monument to David the Sassoon to the Republic Square. There is one Kotchar, one main square and the masterpiece is also one.

NPAK is expanding the sphere of its activities. In the near perspective there are a few attractive and interesting projects among which I would like to mention the projects of foreign artists from Vienna, Frankfurt and Milan. The Milanese Riccardo Fabiani has already started to implement his idea here…