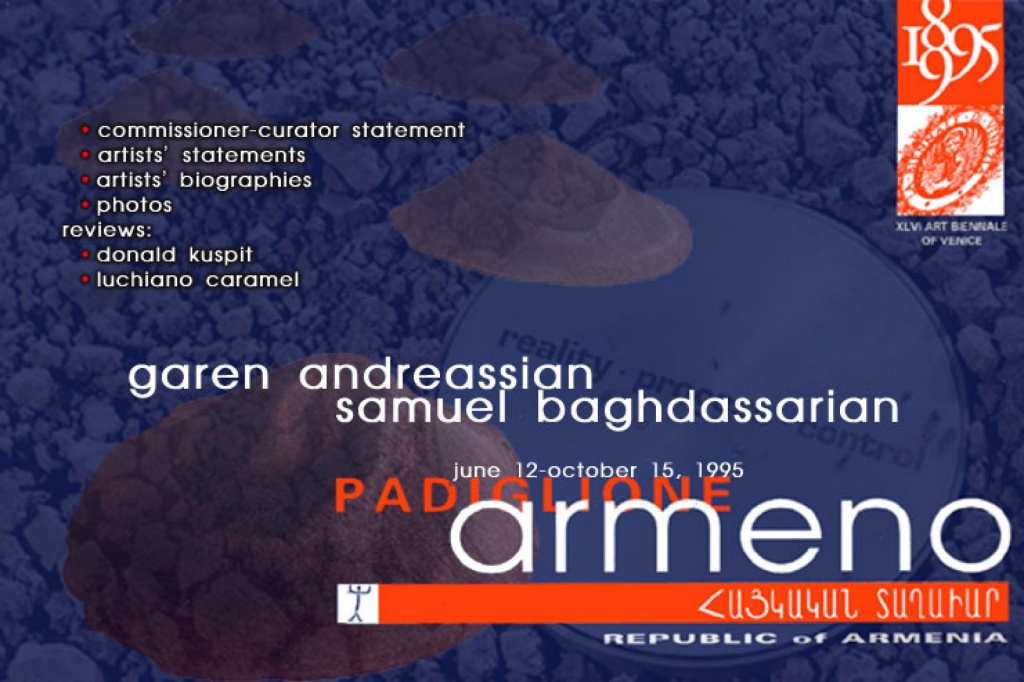 Festivals, Participation of Republic of Armenia in Venice Biennale

Armenia today has its problems, but one it does not have is a lack of cultural vitality. Works of Garen Andreassian and Samuel Baghdassarian proves this. Both live and work in Armenia, both are installation artists who are well-informed about developments in the West, and both incorporate the idea of change in their work, but in most other ways they could not be more different. If I were asked to define briefly what this difference was, I would say that Andreassian is analytical and Baghdassarian is instinctive, but this does no justice to the com¬plexity of their work. It is better to consider them separately, and then see in what ways their ideas and their practice might coincide.

Samuel Baghdassarian was trained as a ceramicist. His work stresses the physical and sensuous proper¬ties of the methods he uses. It is rich in metaphors, and wakes unspecified but very ancient memories. It has a roughness and tactility that are clearly related to his ecological concerns and to the rugged terrain of his homeland. He is drawn to the rock¬-carved fertility symbols of pre- Christian, Armenian art and has described himself as a pagan. Additionally he acknowledges a debt to Duchamp and Tatlin.

He loves the idea of work and the worker–the cut¬ting of stone and metal, the use of fire. He is fasci-nated by machinery and the atmosphere of facto¬ries. All of these concerns and interests come together in his latest piece, in which metal dust (the humble residue of hard work) and electronic magnets ore combined. The result is a series of forms like burial mounds that alternately collapse and reconstitute themselves. The impact is immediate and haunting. Work that has a presence as powerful as this requires little in the way of explanation.

Concerning Andreassian’s new work one must be more circumspect, since its final form is not yet clear Indeed, in the strict sense, there may be no final form, only on ongoing process which, by means of video, will incorporate the experience as it happens. It follows from this interest in process that Andreassian does not share with Baghdassarian’s concern for the sensuous aspect of materials. The material is only a vehicle or transmitter for the idea. But that idea is rarely allowed to remain stable and this introduces an element of difficulty even of discomfort, which the artist values.

He also values words, which often appear in his work strangely distorted. He cites among his most important influences Tristan Tzara and André Breton, poets and writers of manifestoes. Among visual artists, he admires Malevich, Duchamp and Beuys. It was his discovery of Malevich’s radio suprematist works that enabled him to take the first steps away from traditional painting and drawing towards the uncompromising conceptualism he now practices.

The scaffolding cube that he plans for the Biennale may be his most ambitious vehicle for the processing and controlling of experience, It will set up a dynamic relationship between geometric form and the unpredictable flux of events that will pass through and around it. The idea of control is important to Andreassian, but his attitude to it is ambiguous. It is an essential part of the artistic Process, but, in its governmental or official forms, he rejects it completely, and has said: “I cannot imagine any just system” And Armenia, it goes without saying, has had very little experience of justice.

One thing both artists share is a quality of restless intelligence and an experimental approach. Their intellectual rigor is balanced by a spontaneous desire to see what will happen. You will look in vain for specifically national elements in Andreassian’s work, and even in Baghdassarian’s, such elements are subject to extremes of metaphorical displacement, but their work demonstrates that Armenia is not a remote backwater, but a country with a long and splendid artistic tradition that still has something vital to contribute to our emerging “world culture”.