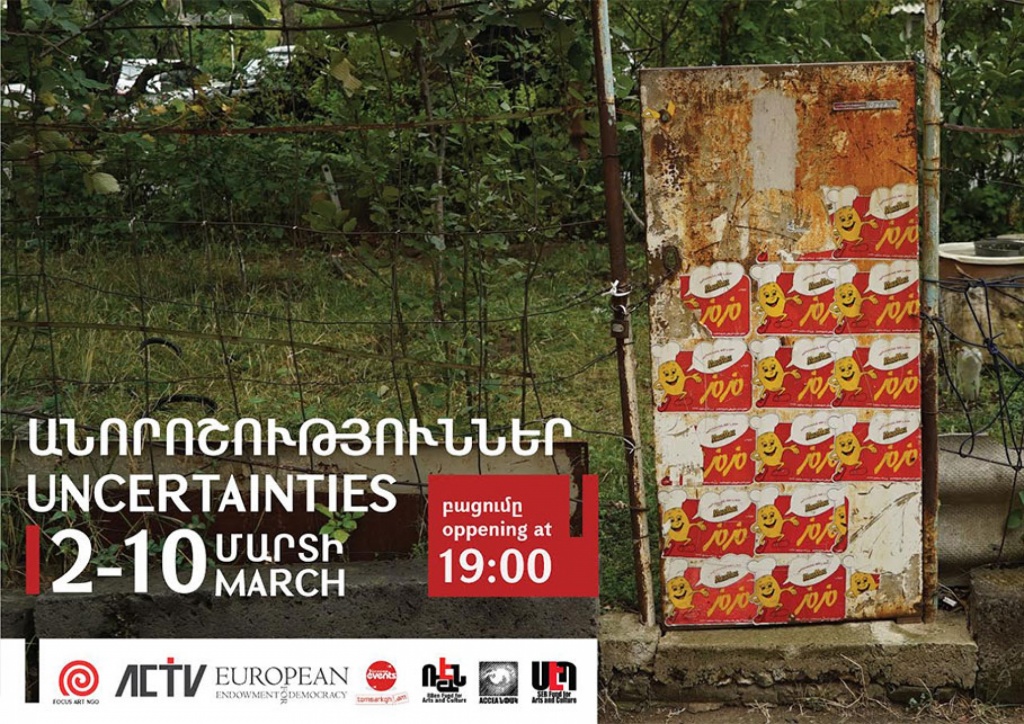 Focus Art NGO invites you at the exhibition UNCERTAINTIES, which will take place in a period between 2-10th March, 2017, Tuesday, at ACCEA. (Address: 1/3 Pavstos Buzand Boulevard
0010 Yerevan, Armenia).
Opening at 19:00

The exhibition presents two individual photo series and one group photo film by ACTV Alternative Journalism Workshop’ students
.
Ani Anotonyan’s photo series entitled “Marginalized Childhood” speak about an abandoned and ignored district in Hrazdan (Armenia) called “Domiks” (Lodges). The district has been established during Soviet period by local Heat and Power Station to house its workers. In time it has served as shelter for Armenian migrants from Baku as well, most of which have later obtained houses and left the district. In 1988 Domiks came into possession of Hrazdan Town and currently 4 migrant families and other socially underprivileged population inhabit the district.
It is always a challenge (for an artist or journalist) to select an emphasis while covering the issues of such a community. Against the background of extremely difficult social conditions and educational issues, the games and daily life of children remains, perhaps, the most unnoticed and invisible subject. And so, this is the one Ani focuses on while unfolding the reality.

Gayane Lalayans project is called “Outdoor Interiors”. In the yards of the high buildings of Soviet period in Abovyan city, one can find a friedge, washing machine, safety box, jars and other stuff. You can also find some dwellers who have enclosed “their” areas with rusty fridge doors or metal bed parts, and filled the spaces up with lots of unnecesery stuff brought out form their appartments. The friege or the cabinets usually serve as a place for tools or firewood, the small and bigger toilets as a reservoirs for irrigation. In some of these spaces there are crops and trees, others are used for different types of gatherings or as summer kitchens. However, most of the yards are locked to prevent “others” entering.
Enclosed areas are not privatized though; in some of them you can barely find the border between the private and the public. The rusty parts of the metal beds are separating the neighbors, while the Chess and Nardi (Backgammone) unites them back, the fridge and the cabins take one out of the apartments, while the blanket and the boiler transform the yard back to the apartments again…

“The present – about the future” photofilm has been produced by Shahane Khachatryan, Mane Matevosyan, Tatev Mkrtchyan, Lilit Hakobyan, Ani Tovmasyan and Ani Sargsyan. It is a research done in Yerevan, Armavir, Lori and 4 communities of Vayots Dzor Province with a purpose to find out the vision(s) of these people on their future of 10 years.
The infants and youngsters (under 25) are quite optimistic about their life and opportunities. The second age group (from 25 to 35) believes it is the best time to settle down and create a family. Then (from 35 to 45) they start to live for their children only and later (45+) as their children tell them to live. Since they are deeply assured that any change for new or better is belated for them.

At first glace, these projects are not somehow or another connected with each other. They have been created in different timeperiods, different places and are covering different issues. However there is a common state connecting all three projects. They are all reviewing the wrinkled/complicated sides of the groping post soviet society and the uncertain situation of the people, demonstrating/enlightening the issues we fail or refuse to notice.

Thus, we decided to entitle the exhibition as Uncertainties – meaning a few particular ones against the background of overall uncertainties.