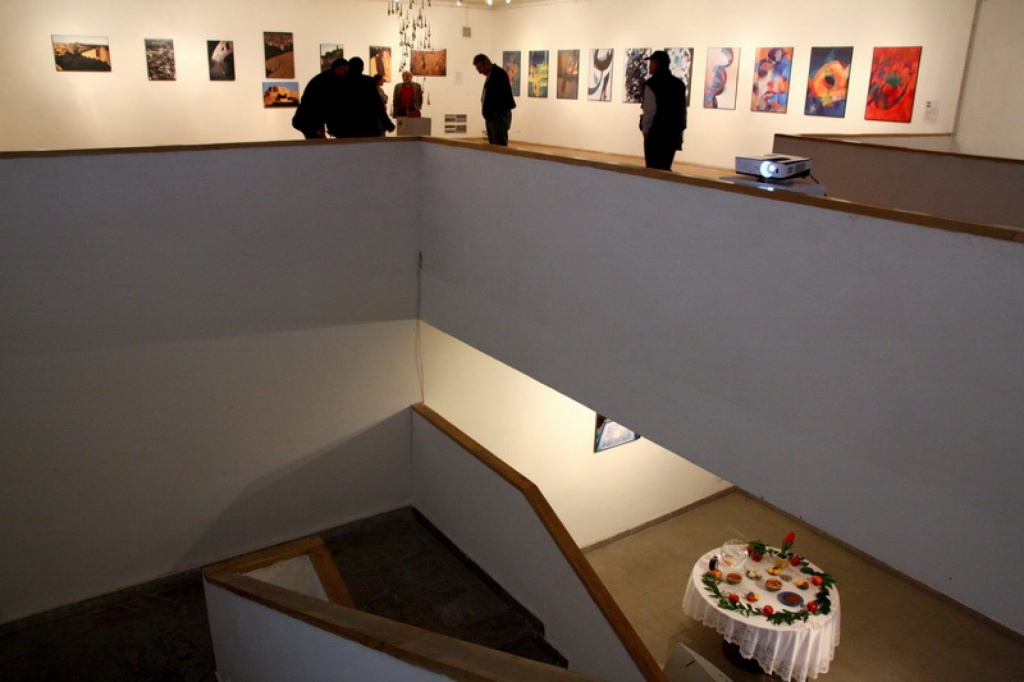 Some four centuries ago, during the reign of the Safavid Dynasty
in Iran’s city of Isfahan gradually ink gave way to the oil
paint and the practices and principles accompanying this
medium. At the same Safavid era started practice of portrait
painting and portraiture on paper, gypsum, and canvas. Later,
in the Qajar period title of “Private Master Painter of the Majesty”
was devised for the painters of the Royal Court. During the reign
of Nasereddin Shah the elevated title of “Kamal-ol-Molk” (Perfection-
of-the-Land) was devised and bestowed upon trend-setter
painter, Mohammad Ghaffari-Kashani. At the same period
foundations of academic education of art were cast. Later, in
1940, by the efforts of French professor Andre Goddard Faculty
of the Fine Arts was established at the University of Tehran. In
1952 Dr. Jalil Ziapoor (The first graduate of the Faculty of Fine
Arts of the University of Tehran) founded the Tehran School of
Fine Arts.
Eventually in 1958 the first Tehran Biennale was organized. This
was the most significant event initiating creation and development
of modern art and modernism by young and innovative
Iranian artists. The initiative was led by Marcos Grigorian an illustrious
personality [of Armenian descent] in Iranian contemporary
art. Marcos Grigorian had studied art in Italy and was
founder of the “Aesthetic Gallery” in Tehran. These events, with
efforts of other unconventional artists pushed forward the concept
of modern art in Iran and brought it to the present day.
Contemporary man, due to the encounter with abundant technological
facilities and schools of thought, such as modernism,
super/ultra modernism, post modernism, etc., willingly or unwillingly
submerged in the inter-disciplinary milieu. By employing
high-speed and magical means of communication, the contemporary
man relies less on aesthetic values of the past and art
practitioners. In the opinion of contemporary artists those values,
criteria and definitions cannot address intellectual needs
of people involved in such a wide spectrum of means and technologies.
However, groups of people who are devoted to the
stable values of the past are exception.
This is why in today’s world lives a studious, strong and diligent
generation, which, having access to a constellation of widespread
means of mass communication and their auxiliary tools,
by espousing and assimilating with world attributes and behaviors,
inadvertently or consciously possesses special attributes
of image, form, content, and perspective. Of course, as it was
stated before, these attributes cannot be measured and evaluated
by tools, values and definitions of the twentieth century.
This is all in a situation, where most of the artists of this generation,
all over the world, do not subscribe to the art of assault,
contest, revolution, morality, unconformity, anarchism and the
artistic definitions of the past generation. And because they consider
their message harmless, all of them express their message
openly, without disguise. This is the contemporary art, the
art of satire and allegory. An emancipated art which is so allegorical
that it has managed to enter all of artistic realms of painting,
theater, performance, video art, sculpture, cinema, even
literature, prose and poetry.
Now, in this vein, presentation of our compatriots’ creations in
your town will convey something beyond what we think. I sincerely
hope that these works will emanate happiness of spirit,
mind and heart in their viewers, which in itself is a wonderful
thing…
Let it be. So be it…
Abbas Mashhadi Zadeh
Tehran, March 6, 2012