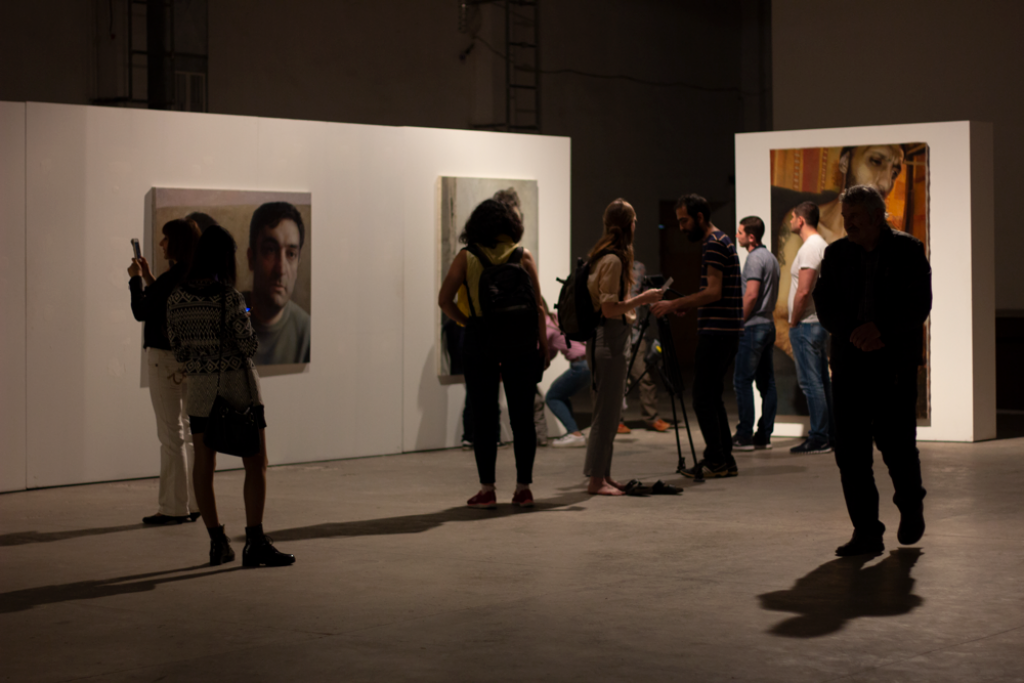 Hovnan Kartashyan’s present series of portraits have been created over a period of three years.
At the first instance they seem to be photo-realistic works, whereas actually they have been made using classic method of grid enlargement. In photorealistic method non-personalization and total reliance on technology play major role. Kardashyan emphasizes the opposite; the emotional link he has with the people he paints. It is important that all these portraits are his friends, relatives, or acquaintances.
The content of this exhibition is shaped by this very contextual, emotional state as well as visual aspect of technological contradiction. This is why the curator, instead of curatorial statement has presented the record of his conversation with the artist.
The social connotation of “Inter-Relationship” (the title of the exhibition), has been disclosed by the still-life canvas of the artist. Humorously the artist calls this still-life a self-portrait. The tools depicted in this work are the means of the artist’s subsistence, outside his artistic activity. Thus, the very daily imperative of earning a living and not having free time, has forced the artist to limit his contacts with friends. As a result, the 3 year process of creating these portraits, for the artist has been the means of filling this gap of inter-relations.

Edgar Amroyan – Hovnan, in 2013, when we were leaving the National Gallery in London, I remember you said that you were not impressed by the works of the classic painters. I am saying this question because there is an explicit reference in your works to the classics.
Hovnan Kartashyan – Yes, I meant that before seeing the classics’ works first hand, my impression of their works was through intermediaries. I had heard from various artists and lecturers how they were overwhelmed, shocked and mesmerized by the works they had seen at various galleries.
EA – In other words, it was redundant information.
HK – Yes, I tried to forget all that, and view them with an ordinary eye. As a result I saw a lot of shortcomings. For example, in one of the portraits of Velasquez, a whole section of the sleeve of the clothing was painted in one tone. I also noticed a lot of similar things on Rembrandt’s paintings. But there was something important in that immediate reality: They did not desire to show their professionalism, which allowed getting closer to them.
EA – in other words, they did not give a damn.
HK – Yes, they did not give a damn. I noticed that just before the 20th century art tried to get out of the format of the canvas through painting, and create the essence. But it is all the same, they did not get beyond painting.
EA – What do you mean by “They did not get beyond”?
HK – I mean, there was everything except for essence, which should have existed separately.
EA – And in your opinion which artists managed to get that essence?
HK – Such a thing I have noticed only in the works of contemporary artists.
EA – Hovnan, During our discussions you often criticized Post-Modernism. How do your works oppose Post-Modernism?
HK – By my portraits, contrary to Post-Modernism, I try to find confidence in people. This is why in transferring my portraits onto the canvas I do not use technical instruments. I transfer them by means of “grid method”, because to me, every section of the portrait is extremely important, I invest a lot of respect in them, they are my feelings, and in some ways, my love for the person in question.
EA – In fact, you want to prove to yourself that your feelings are right, and thus you juxtapose your feelings to Post-Modernism, turning them into pillars, which one can hold onto.
HK – Yes. I think feelings are the only thing through which human beings can open up to the world and get rid of the protective layers.
EA – Yes. I think your paintings too are liberated from “protective layer”, and perhaps this is good.